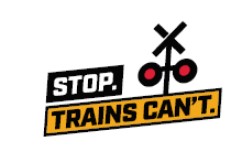 You can’t beat a train on the Tracks: Stop. Trains Can’t

The goal of this campaign is to raise awareness about the need for rail-safety education and empower the general public to keep themselves and others safe near highway-rail grade crossings and railroad rights-of-way.