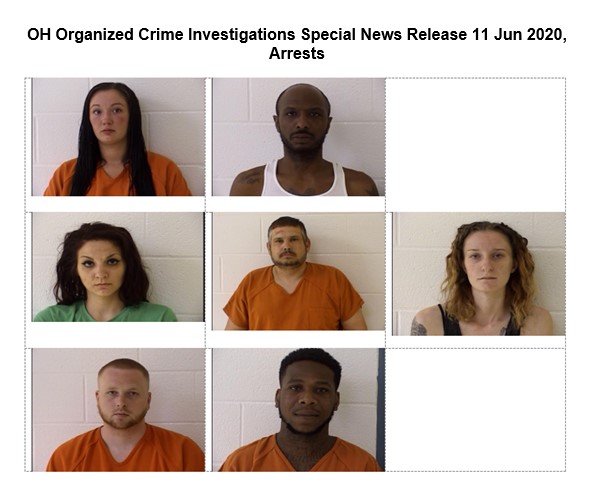 On 10 Jun 2020 Agents, along with the Monroe and Washington County Special Response Teams, executed search warrants at 1572 Elizabeth Street, Apt. A  and Apt. C, Belpre, OH, along with  949 Lancaster Street, Marietta, OH, in reference to drug trafficking.

Tytus Shields was located at 1572 Elizabeth Street, Apt. A, Belpre, OH, where $20,257 cash, firearms, and heroin totaling 86.92 grams, was located.  Shields has prior felony convictions for drugs, placing him under disability, preventing his owning/possessing a firearm.  One (1) firearm located was determined to be stolen from Wood County, WV.

Andrew Johnson and Kelci Wise were located at 1572 Elizabeth Street,  Apt. C, Belpre, OH, where four bags of heroin weighing a total of 198.02 grams, 227.08 grams of methamphetamine, $10,180 cash, digital scales, and other items related to drug trafficking were seized.  Wise was found to have .90 grams of methamphetamine on her person.

Kyleigh Rymer and Steven Siegel tried to flee out the back-door of 1572 Elizabeth Street, Apt. C.  Rymer and Siegel were stopped and secured.  Rymer was found trying to conceal, what was later determined to be .49 grams of suspected heroin, and $1,250.00 cash.  Siegel was found in possession of 1.59 grams of heroin and $2,801 cash.  Siegel’s vehicle revealed a stolen license plate from Parkersburg, WV.

Timothy Payne Jr. and Haley Hull were located at the 949 Lancaster Street location.  Seized at this location were 3,064.37 grams of suspected heroin and 1,340 grams of suspected fentanyl.  Also located were three firearms, $10,754 cash, items used to mix/prepare fentanyl and heroin, scales, hydraulic press, and other items related to drug trafficking.  Payne and Hull’s infant child was also present at the residence.