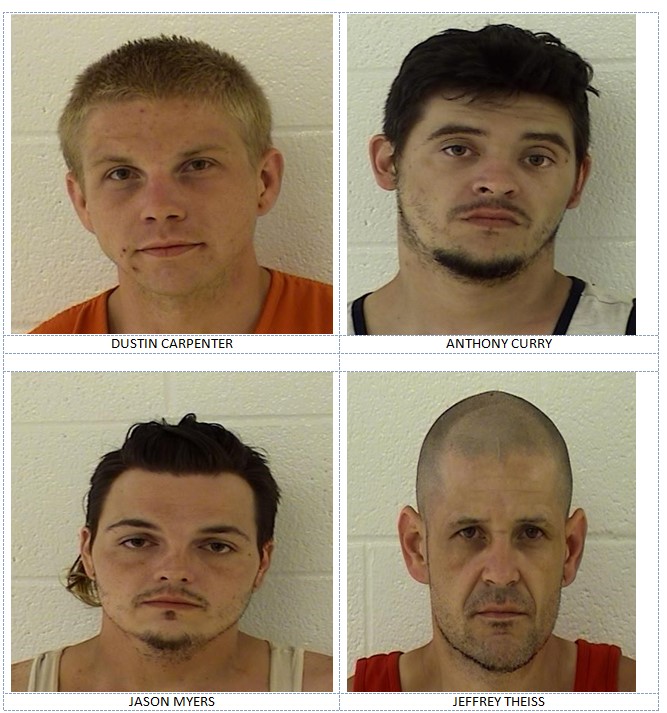 On 25 Jul 19 Agents conducted a search warrant at 122A Lindwood Avenue, Marietta,  Ohio, regarding a drug trafficking and drug abuse investigation. Agents located Jeffrey Theiss, Anthony Curry, Dustin Carpenter, and other individuals at the residence.

While searching, Agents found  Anthony Curryin possession of a 1×1 plastic baggie with suspected methamphetamine and 2 glass smoking pipes. Dustin Carpenter was found to have a loaded syringe and a small plastic baggie with suspected heroin.  Also located in common areas of the home were digital scales, glass smoking pipes, a baggie containing suspected methamphetamine and two bags of marijuana.

Agents learned that Jeffrey Theiss had an active warrant for his arrest for traffic violations.

Agents made contact with Jason Myers who was observed leaving the trailer just prior to Agents arriving. Myers was found to be in possession of a loaded syringe, a baggie of suspected heroin, which Myers confirmed as heroin, and a drug use kit.

All four individuals appeared in Marietta Municipal Court and are now being held on bond at the Washington County Jail.  Theiss was given a $12,000 bond, including the traffic warrants.  Curry was given a bond of $12,675 including traffic charges.   Carpenter is being held on $2,500 bond and Myers has a $10,000 bond.